We are thirsty for justice.

We are Christians, Muslims, Jews, and other people of conscience calling on all consumers and stores to stop buying and selling SodaStream carbonation devices or other products made by this company. SodaStream manufactures these machines within an Israeli settlement in occupied Palestinian territory. These settlements are illegal under international law and are obstacles to peace. We choose not to partake in supporting this unethical enterprise and ask consumers and stores to join us. sign petition

Nestlé is the world’s largest food company, it owns 53.8% share of leading Israeli food manufacturer Osem, an investment worth over $850 million.

In 1998, Mr. Peter Brabeck-Letmathe on behalf of Nestle, received the Jubilee Award by the Israeli Prime Minister Netanyahu [Jubilee Award]. Following the award in June 2002 Nestle opened its Research & Development Centre in Israel, in Sderot. And since then it has steadily increased its investment in Israel, its initial 10% stake in Osem has now grown to a controlling 53.8%. Nestle also owns Nespresso Israel Ltd in Tel Aviv which supplies coffee brewing equipment. In 2010 Nestle acquired a 51% stake in Israeli babyfood company Materna Laboratories for $72 million.

Nestle has 9 factories in Israel, which after China(18) and Russia(11) is the highest number in any country in Asia – disproportionately high when one considers its size and population. And in May 2011, Nestle announced plans to build another factory in Israel, an ice cream plant worth $40 million.

Nestlé also owns 30% stake in L’Oréal, another company on the boycott list.

Howard Schultz, the founder, chairman, president and chief executive officer of Starbucks who also owns 31.6 million shares of Starbucks stock (worth around $1.4 billion in Nov 2011) is an active zionist.

In 1998 he was honoured by the Jerusalem Fund of Aish HaTorah with “The Israel 50th Anniversary Friend of Zion Tribute Award” for his services to the zionist state in “playing a key role in promoting close alliance between the United States and Israel”. The ultra-right wing Jerusalem Fund of Aish HaTorah funds Israeli arms fairs chaired by the butcher of Jenin, General Shaul Mofaz, and the zionist media pressure group honestreporting.com, they were also implicated in the production and distribution of the infamous islamophobic film ‘Obesession’. Starbucks proudly displayed the award on the company’s website under the section of ‘awarda and accolades’ the Starbucks company has won, however, once the boycott started to bite the award mysteriously disappeared from its website.

d Shultz work as a propagandist for Israel has been praised by the Israeli Foreign Ministry as being key to Israel’s long-term PR success. On April 4th 2002, whilst the Israeli army was slaughtering Palestinians in Jenin Howard Shultz made a provocative speech blaming the Palestinians, suggesting the intifada was a manifestation of anti- Semitism, and asked people to unite behind Israel. Starbucks also sponsors fund raisers for Israel.

At a time when other businesses were desperately pulling out of Israel, Starbucks decided to help Israel’s floundering economy and open Starbucks in Israel. The venture failed but Shultz has vowed Starbucks will “return to Israel in due course”.

Starbucks has opened outlets in US bases in Afghanistan and Iraq, and at the illegal torture centre in Guantanamo Bay. Customer Relations say “Starbucks has the deepest respect and admiration for U.S. military.. who risk their lives to protect Americans and our values of freedom and democracy”. Petty Officer Barry Tate who is serving in Guantanamo Bay agrees that Starbucks is helping “lift the morale” of the guards and interrogator’s at Guantanamo Bay.

The information below is from an organization which is in support of both Zionism and Pro Israel.

According to Israeli Justice Minister Ayelet Shaked, Facebook granted 95 percent of 158 requests submitted to the company over the past four months to ban content that was considered "incitement." Al-Khatib claims that there have been numerous cases of Palestinian news agencies receiving Facebook bans without explanation, including blocking Gaza 24.

Amazon who has now stopped the country of Iran's population ability to participate on the giant's online shopping networks siding with the US that Iran had participated in 9//11 attacks. While doing more investigation, our staff found out that Amazon 100% supports Israel's actions. And its actions to deny Iranians to use Amazon is ridicules. see video

Talking with Nordstrom about Ahava and Occupation

Since 2010, human rights activists have been in communication with Nordstrom about Ahava cosmetics, which are labeled as Israeli products but are actually sourced and produced in illegal settlements on occupied Palestinian territory.
http://www.StolenBeauty.org
http://www.WhoProfits.org
In the Seattle area: http://www.PalestineInformation.org
For more THEY REALLY SAID THAT audio/video podcasts: http://www.CredibleThreatWorks.org

Oro Gold Cosmetics, founded out of Israel by Mazal Enterprises, has grown into a global brand with high-end, luxury, beauty products by providing a unique mix of benefits and advantages over other cosmetic products. source: http://www.jewocity.com/blog/oro-gold-cosmetics-thrives-in-global-cosmetic-market/8456 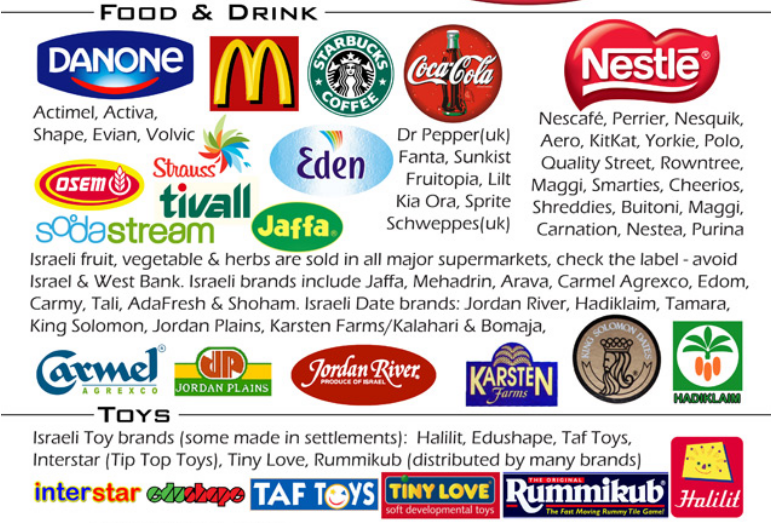 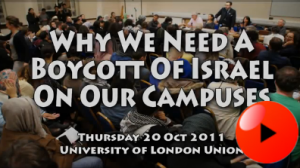 Sean Rillo Raczka, the vice president of the University of London Union, the largest union in Europe, presents Why We Need a Boycott of Israel On Our Campuses.

From 1966 Coca-Cola has been a staunch supporter of Israel. In 1997 the Government of Israel Economic Mission honored Coca-Cola at the Israel Trade Award Dinner for its continued support of Israel for the last 30 years and for refusing to abide by the Arab League boycott of Israel.

Every year Coca Cola bankrolls the American-Israel Chamber of Commerce Awards which honors companies that have contributed most to the Israeli economy. In 2009 a Coca-Cola sponsored award went to Israel’s Lobby AIPAC for its successful lobbying of the Senate to reject of the UN call for “immediate ceasefire” and endorse the continuation of the Israel military assault on Gaza.

In 2009 Coca-Cola hosted a special reception at the Coca-Cola world headquarters to honour Brigadier-General Ben-Eliezer. Ben-Eliezer is a wanted war criminal, during the Six-Day War his unit was responsible for the execution of over 300 Egyptian POWs. Under Sharon, Ben-Eliezer served as Defence Minister presiding over the massacre at Jenin.

For the past two decades, nearly every year, Coca-Cola has sponsored the JCC Maccabi Games whose stated aim is to cultivate Jewish youth in an informal setting to “encourage their identification with the state of Israel”. As part of this, Coca Cola has sponsored young children to visit Israeli military bases and spend time with war criminals in order to engender empathy, in their own words “visit an air force base.. talk with the pilots that are the elite Israel Defense Force units..meet fighters of the army.”.

Coca-Cola Israel, Israel’s third largest food & beverages company, owns dairy farms in the illegal Israeli settlements of Shadmot Mechola in the Jordan Valley and a plant in the industrial zone of Katzerin in the occupied Golan Heights.

McDonald’s Corporation is a major corporate partner of the Jewish United Fund and Jewish Federation. According to the Jewish United Fund, through its Israel Commission it “works to maintain American military, economic and diplomatic support for Israel; monitors and, when necessary, responds to media coverage of Israel”. The Jewish United Fund also runs “Fun-filled Summer Family Missions to Israel” where families get to “visit an army base and meet with Israeli soldiers” and “visit our sister city, Kiryat Gat and see the important work we are doing there”. Kiryat Gat is built on stolen Palestinian land – the lands of the villages of Iraq Al Manshiya and Al-Faluja whose residents were ethnically cleansed in 1949 in contravention of International Law. Through its “Partnership to Israel” programme, the Jewish United Fund provides $1.3 million annually to help further settlement and development of Kiryat Gat. The Jewish Federation, through its Israel Action Network is tasked to fight “efforts to boycott Israeli products” and “campaigns, such as equating Israel with apartheid South Africa”.

McDonald’s first restaurant in the Middle East was in Israel, opened in 1993, since then it has 160 restaurants in Israel (1996) with a 60% market share, employing around 4000 Israelis. Since April 2009 McDonald’s has also opened 15 branches of McCafe chain in Israel, with plans to open 10 new branches every year.

McDonalds discriminates against its Arab workers, in 2004 it sacked an Arab worker in Israel because she was caught speaking arabic to another Arab employee. Arabic, along with Hebrew, is the official language of Israel spoken by 20% of the population.

According to the American Jewish Committee (AJC), whose Executive Director “regularly meets with Israeli Prime Minister Benjamin Netanyahu”, McDonald’s in July 2001 immediately pulled an advertising campaign in Egypt when the ADC contacted them to complaint that the singer featured in the advert had in the past performed a song critical of Israel. Within 24 hours of the complaint, the advert was cancelled and according to the Egyptian franchise of McDonald’s “all copies of the tapes were whisked ‘back to the main offices'”!

The “Long live Palestine, boycott Israel” group on the "Buycott" app was set up in April by a British teenager. It is going from strength to strength. The group saw traffic grow by almost 30 percent in just 12 hours on the morning of Thursday 7. 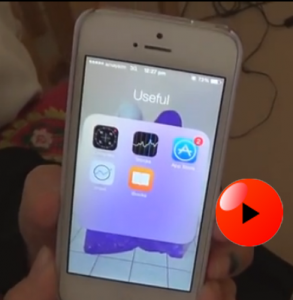