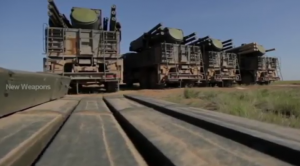 This is the back end of this most nasty mobile anti aircraft vehicle.

Though the country is perhaps not considered the superpower it once was, Russia's armed forces have gone through a significant transformation since President Vladimir Putin's re-election in 2012. The army is being split into smaller, more dynamic brigades. The focus is on new technologies rather than brute manpower. (For instance, this Pantsir-S1 anti-aircraft system is basically a tank with a load of extra cannons sticking out of it.) source: http://www.businessinsider.com/the-most-advanced-weapons-systems-used-by-the-russian-army-2015-1?op=1?r=UK&IR=T

Borei Class is a Russian fourth-generation nuclear-powered missile submarine. It is intended to eventually replace the ageing Delta III and Typhoon Class submarines and become an important deterrent of the Russian Navy. It is the first class of submarines developed by Russia since the soviet era.

Designated Project 935, it began in 1996 to manufacture the first unit of the Borei Class submarine. The project name was changed to Project 955 and the submarine was redesigned to accommodate the new submarine-launched ballistic missile (SLBM) Bulava (SS-NX-30), in place of the abandoned R-39UTTH Bark missile. see video 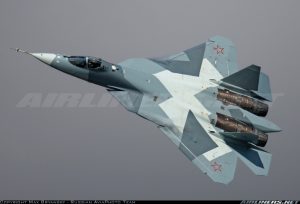 Earlier, US Navy Commodore Ollie Lewis told CNN that "we have to consider there is an adversary ready to challenge us in the undersea domain and that [America's] undersea superiority is not guaranteed." Former NATO commander James Stavridis recently called Russian subs as posing "an existential threat to US carrier groups."

Lukanin doubts that the US would develop a submarine resembling the Yasen class, since the Pentagon has another strategy. "The Americans have traditionally developed heavy offensive weapons, including cruise and ballistic missiles. They don't have defensive fleet, except for the Coast Guard," he explained.
Read more: http://sputniknews.com/military/20160507/1039234549/us-russia-yasen-submarines.html#ixzz48B8TgWCs

Did you know that Russia is building submarines that are so quiet that the U.S. military cannot detect them?  These “black hole” submarines can freely approach the coastlines of the United States without fear of being detected whenever they want.  In fact, a “nuclear-powered attack submarine armed with long-range cruise missiles” sailed around in the Gulf of Mexico for several weeks without being detected back in 2012.  And now Russia is launching a new class of subs that have “advanced stealth technology”.  The U.S. Navy openly acknowledges that they cannot track these subs when they are submerged.  That means that the Russians are able to sail right up to our coastlines and launch nukes whenever they want.  But instead of trying to find a way to counteract this potential threat, the Obama administration has been working very hard to dismantle the U.S. strategic nuclear arsenal.  In the end, we could potentially pay a great price for this utter foolishness. source: https://www.rt.com/news/stealth-submarine-russia-novorossiysk-451/

Russia vs USA (In military technology) 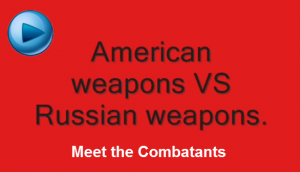 Ka-50(52) and AH-64 Apache. Told to be 2 of the best attack helicopters on Earth. But we'll determine which is best 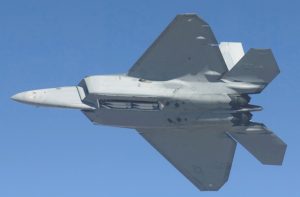 The U.S. F-22A Raptor, B-2A Spirit and planned “2018 bomber” are the only US designs capable of surviving in the technological environment presented by the current and emerging generation of Russian high technology weapons. The 'Fulda Gap optimised' F-35 Joint Strike Fighter is not capable of surviving in this environment and is for all intents and purposes now a strategically irrelevant design, which is draining scarce funds away from programs which are strategically much more important(Image US AIr Force).

Advanced Russian technology exports present a major strategic risk for the US, whether operated by China, or smaller players like Iran or Venezuela. These systems will deny access to most US ISR and combat aircraft, with only the B-2A, the “2018 bomber” and the F-22A designed to penetrate such defences. Until the “2018 bomber” is operational, the US will have only 200 aircraft with any capability to deal with this emerging environment.